The Hoffmann family of Ebenezer are sixth generation Barossa farmers

Johann George and Anna Elizabeth Hoffmann, husband and wife, emigrated from the township of Friedstadt in Prussia (Silesia), to South Australia in 1844. They first settled in Birdwood, Adelaide Hills, before moving to the Northern Barossa Valley parish of Ebenezer. Here, they bought 25 hectares of land and established their modest mud slab hut on the Hoffmann property in 1857.

Silesian and English emigrants essentially established the Barossa, and so Johann and Anna emigrated alongside other European pioneers. Silesian emigrants were mainly peasant farmers and artisans fleeing Prussian religious persecution, electing to start a new life of freedom in the Barossa Valley.

Johann and Anna were by no means new to working the land, and on their arrival to the Barossa established a traditional farm. By the late 1800’s, the Hoffmann farm included an orchard, vineyard, dairy and sheep. With years and experience, came generational wisdom; a better understanding of seasons, climate, and this knowledge has been continually handed down to the next generation.

It wasn’t until the late 1980’s that the vineyard expanded on the Hoffmann property.  While the family understood that the Mediterranean climate and fertile soils of the Barossa Valley were well suited to growing grapes, there wasn’t demand for premium grapes until the 1980’s.  In fact, there had been no distinction in quality between the sub-regions of the Barossa.

Eventually there was a cultural and industry shift towards premium Shiraz from the Barossa Valley and the Hoffmann family were well placed to supply.

And so, as the vineyard began to grow in size and stature, and the family transformed their approach from grape growing to winegrowing and started to build an enviable reputation for the most sought-after grapes in the Barossa. 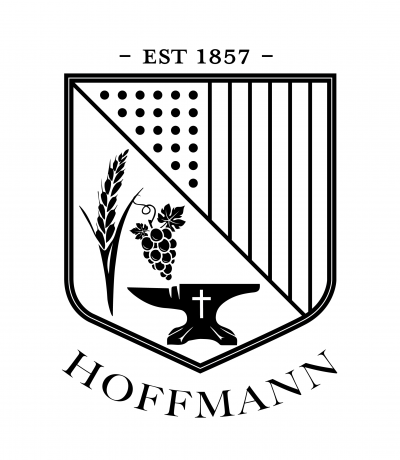 The crest represents the Hoffmann family history in Australia. Anvil: the blacksmith history of Dimchurch, the artisan and peasant background; Grain: mixed farming being dairy, sheep, apricots, fruit orchards and cropping until the late 1980’s.  Bush vines and trellised rows: represent our traditional and modern approach to viticulture, with the 6 lines and 6 dots representing the generations of Hoffmann’s in Australia.  The diagonal line from North West to South East represents the Hoffmann family migration from Prussia to Australia. Surrounded by the double border representing the strength of the passing of generational knowledge.